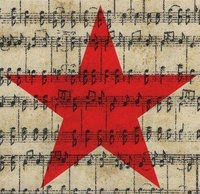 $3
There will of course be literature and free vegan treats!
Proceeds benefit the Memphis Socialist Party.
Thanks to everyone for showing your support at these events! It is apparent that the artist and art lover in all of us thirsts for meaningful and imaginative resistance to the self-interested homogeneous corporate aesthetic forced on us by our universities, the media and our bosses.
Together we are building a movement which cannot be ignored!
Posted by S. at 7:24 PM No comments:

Local activists, including members of the Memphis Socialist Party, gathered at the Mid-South Peace and Justice Center yesterday to file Freedom of Information Act requests as part of a nationwide day of action against recent FBI harassment of anti-war and international solidary activists. A few hours prior to the event, three FBI Joint Terrorism Task Force agents visited the Center to inform them that there was going to be a demonstration. They left after they were told that the Center was not only aware of the event but had planned it.
Approximately two hours later, the Memphis Police Department's TACT unit arrived with at least six unmarked black SUVs and one marked squad car. When questioned about the reason for their presence, they replied that they were there to keep the peace. The Center was eventually able to get into contact with the unit's chief, who made a vague statement about a call from a "concerned citizen."
On the same day, at least two activists (including the Chair of the Memphis Socialist Party) had their homes entered by the Shelby County Sheriff's Department on the pretext of warrants issued for failure to appear in court. In both cases residents were not given the opportunity to view the warrant, despite multiple requests. At the deCleyre Cooperative, police entered without permission through an unlocked door and moved through every room with their guns drawn, searching for someone who hadn't lived there in years.
Why were residents not allowed to see the warrants used to enter their homes? Why was the TACT unit, described by MPD's website as "not subject to regular calls," and "responsible for handling barricade situations, hostage rescues, counter terrorism, and high risk felony apprehensions," sent to respond to a single, unverified phone call? How is it a coincidence when the same group of activists is targeted by three separate law enforcement agencies on the same day?
The FBI has a long history of intimidation, harassment, and repression, but we refuse to be silenced by it. We will continue to stand in solidarity with our activist brothers and sisters.
Check out other local folks' first-hand reactions here and here.
Read the local paper's take on it here.
Posted by melanie at 6:47 PM 1 comment:

ART IN RESPONSE--CALL FOR ENTRIES 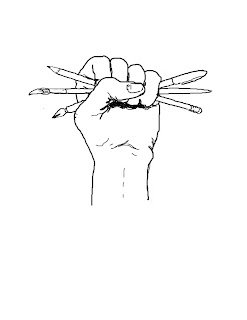 “Art in Response” is an exhibition at Caritas Village organized by Radical Arts Memphis, an alliance of artists dedicated to achieving a communal voice through art. We seek solidarity between the artistic and political communities of Memphis in an effort to combat inequality and exploitation in our city. We wish to create a forum which questions the prevailing structures of power and pursues... a radical re-imagination of our society.
“Art in Response” will feature works from the Memphis community. The works should critically question the systemic divisions (race, gender, class, etc) within our city. Works should explore the ways in which these forms of separation affect us as both individuals and as a community.

HOW TO SUBMIT
all mediums are welcome-visual art, video, sound, poetry, music, etc.
all entries should be emailed to artinresponse@gmail.com by JANUARY 28th. Please include your contact information (name, email address, phone number) in the email submission.

FOR VISUAL ART ENTRIES
Please send JPGs of your work and a title sheet listing the dimensions, medium and titles of the pieces.

FOR OTHER ENTRIES
Please send mp3, .mov, or .doc files of your work and a title sheet listing the length and title of the piece.
If you are unable to email your submissions, please contact Bennett Foster at (901)-210-3768 to set up a time to have your work photographed/reviewed for submission.

*It is free to submit work to this show, however, please consider making a donation to Caritas Village. 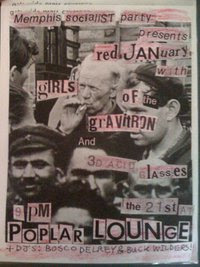 $3 dollars
There will be literature and vegan treats!

Come out and support the Socialist Party!
Posted by S. at 2:43 PM No comments:

No to Political Assasinations! Let’s Make a Democratic Revolution!

January 9, 2011 - On behalf of the Socialist Party USA, we send our
sincerest condolences to the families of the people killed in the recent
shooting in Tuscon, Arizona. This was an attempt at political
assassination as the shooter, 22-year-old Jared Lee Loughner, reportedly
shot Rep. Gabrielle Giffords (AZ, D.) in the head before turning his gun
on the crowd. The dead include a 9 year child and five others, with
twelve people wounded. Rep. Giffords remains in critical condition.

The same cannot be said of the far-right. Right wing activists have
consistently engaged in acts of assassination and in rhetoric that
reinforces and encourages such acts. We can note the murder of abortion
rights activists such as Dr. Barnett Slepian as well as the violent and
hyper-masculine language consistently promoted by the right-wing media.
Loughner was reported to be heavily influenced by these ideas, motivated
by the call to arms being issued by the far-right.

And he did not have to look hard for motivation to attack Giffords.
During the recent mid-term election, Sarah Palin’s Political Action
Committee produced a chart that targeted Democrats. The chart employed
crosshairs to identify the electoral opponents and utilized language like
“We'll aim for these races,” “This is just the first salvo” and “join me
in the fight.” While Sarah Palin did not pull the trigger, she certainly
holds a significant amount of guilt for creating the conditions in which
such as act was possible.

Now is the time to reject such politics both here in the US and globally.
A fitting tribute to the innocent victims from the Tuscon shooting would
be to end the US occupation of Iraq, Afghanistan and to end the bombings
in Pakistan. The US military has, through targeted assassinations,
extraordinary renditions and drone attacks, made political violence an
everyday part of life in this region. As we learned in Tuscon today, such
violence creates real human tragedies. The lives of innocents lost in the
Middle East to political violence are of equal value to Loughner’s
victims.

As socialists, we aim to create a non-violent world. A world where the
great wealth of society is used to satisfy human needs. Ours will be a
democratic revolution where the great majority of working people are
finally able to express their desire for things like jobs, peace and
freedom. There is no place in this process, in the transition to a
democratic socialist society, for political assassination. This is the
political tool of the right and only serves to re-enforce the presence of
the repressive apparatus of the government. We want freedom and believe
that mass non-violent political protests are the means to acquire it. We
invite you to join us in this struggle for a better world.
Posted by S. at 10:35 AM No comments: 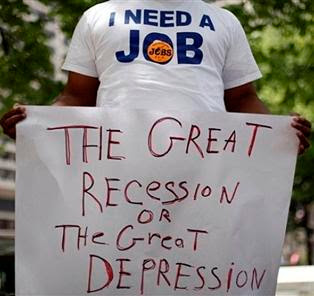 Recovery Noises and Political Taboos
by Prof. Richard D. Wolff
To avoid the instability of capitalism and its huge social costs requires changing the system. That remains the basic issue for a new year and a new generation.

Wikileaks, War and Hard Truths
by Lydia Howell
How many hundreds of thousands of people can be murdered in the name of September 11th before the Americans say, “Enough!”?

Socialists Support Freedom to Write
by Dianne
It requested that a ban on Dr. Richard Shapiro be lifted and charges dropped against Angana Chatterji and Zahir-ud-Din.

The Prodigal Book Reviewer
by Julie
If a little person isn’t ridiculed, it seems, he or she has to be imbued with mystical qualities.

Carl Sandburg Born January 6, 1878
He moved to Milwaukee, Wisconsin, and joined the Social Democratic Party, the name by which the Socialist Party of America was known in the state.
Posted by S. at 9:25 PM No comments: